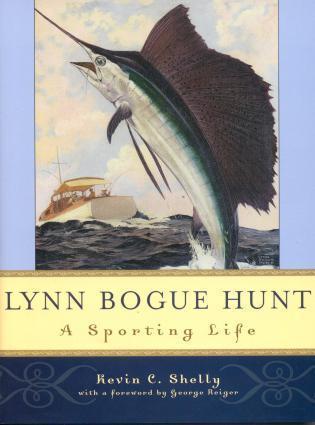 Lynn Bogue Hunt lived in two worlds throughout his 82 years. Born into a well-off family, he grew up poor, raised by a single parent: the tattered coat he wore to his high school graduation was patched and let out; his mismatched pants secondhand. Money tattered to Hunt the rest of his life.

One of his favorite sayings as an adult was “Art for arts' sake, but money for God’s sake!” During the Depression, his popular and prolific artwork earned him as much as $50,000 a year – about $650,000 in today’s dollars. He had money enough then for a maid and a fashionable Long Island address. Concerned with appearances, Hunt dressed meticulously, even when fishing. An immaculate white smock protected his customary painting attire: suit, tie and starched white shirt.

But Hunt spent money faster than he made it. A poor businessman who did not plan for the future, he had spent his wealth by the time he died.

Contradictions marked Hunt’s life: Indifferent in the classroom, he assisted scientists as an adult. Though he told family and teachers he felt most at home in the woods, he resided in or near New York City for more than 57 years. Described as friendly and gregarious, he also struck those who knew him as quiet and self-effacing. An early conservationist and animal lover, he also advocated catch-and-release game fishing as early as 1935 and supported Ducks Unlimited’s habitat restoration. An urbane man, member of the arty Dutch Treat Club, welcomed at the acerbic Algonquin Roundtable and the exclusive Angler’s Club, Hunt was also an ordinary suburban commuter much of his adult life, known to his grandchildren as “Papa Toot Toot” because of his daily travel on the Long Island Railroad.

Embarrassed by and ultimately estranged from his independent wife, the artist openly kept a mistress. As a result, Hunt’s wife sometimes spent months alone on the east coast of Florida while Hunt simultaneously went to the west coast of Florida, fishing and painting in the company of his girlfriend. Despite his estrangement, his wife unstintingly cared for him during his last decade, as he grew increasingly dependent when infirmities and lost eyesight stopped his work.

His first published magazine illustration – a line drawing of a strutting grouse accompanying a story he wrote – appeared inside Sports Afield in 1897. A 1951 cover painting of mallards coming in for Field & Stream- his 106th cover illustration for that magazine – book-ended an astounding 54-year career as a leading wildlife artist during the Golden Age of magazine illustration.

Hunt made some of the most recognizable sporting art ever created.